AMT stands for Alternative Minimum Tax. According to the official definition in 26 U.S. code §55 and the actual usage on line 45 of form 1040, it is the amount by which the Tentative Minimum Tax (TMT) exceeds the Regular Income Tax (RIT).

The Tentative Minimum Tax (TMT) is the tax computed with a parallel method different from the regular tax, which we will discuss in next section. 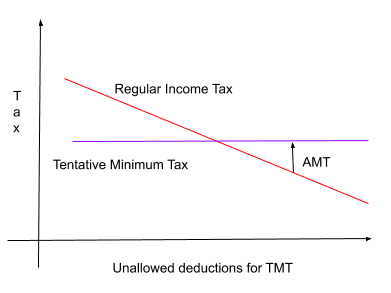 When Tenative Minimum Tax (TMT) is greater than the Regular Income Tax (RIT), then we say you have hit the AMT, or you pay this additional tax on top of the regular tax as formulated on form 1040. In reality, however, it is not that you pay another tax called AMT tax, but you just pay Tentative Minimum Tax (TMT), because AMT can be expressed as:

So the total tax you pay is:

In other words, you pay regular tax or tentative minimum tax, whichever is higher. You cannot beat IRS.

It is computed by the following steps:

A joint filer with AGI $150,000. Suppose all their deductions are unallowed for AMT purpose. The Tentative Minimum Tax (TMT) is computed as (Y2016):

Suppose the deduction is D, and since the personal exemptions are 8100 for 2 persons, the Regular Income Tax (RIT) is (Y2016):

Obviously the more the deduction, the less regular tax. When deduction reaches 39,222, the regular tax is below the tentative minimum tax, so the AMT kicks in.

The new tax law did not eliminate the AMT as it should have, but increased the exemption amounts and phaseout thresholds which are tabulated below:

The purpose of AMT is ensure that rich people to pay a minimum amount of taxes by disallow certain deductions. However it is not so much about richness as theoretically anyone who has income greater than the AMT exemption amount can trigger AMT, rather it is about how much you have deducted unallowed amount for AMT purpose, and how much tax you have paid relative to your income. Let us use two examples to illustrate this.

Bill and Hillary Clinton did not pay AMT in their 2015 tax return even their income is 10.5 millions. This is because the deduction is moderate relatively speaking (and a major part of the deductions was charitable donations which were allowed), and they paid 3.2 millions in regular taxes. The effective tax rate is 30.5% which exceeds the maximum 28% AMT tax rate.

In Donald Trump’s 2005 tax return, he paid 38 millions federal tax, of which 31 millions were attributed to AMT, without which he would have paid a little over 10% income tax of his AGI.

In conclusion, when you hit AMT, it does not mean that you hit another tax, but IRS does not allow you to deduct anymore. The amount of AMT tax represents the tax you would have save if the deduction were allowed.